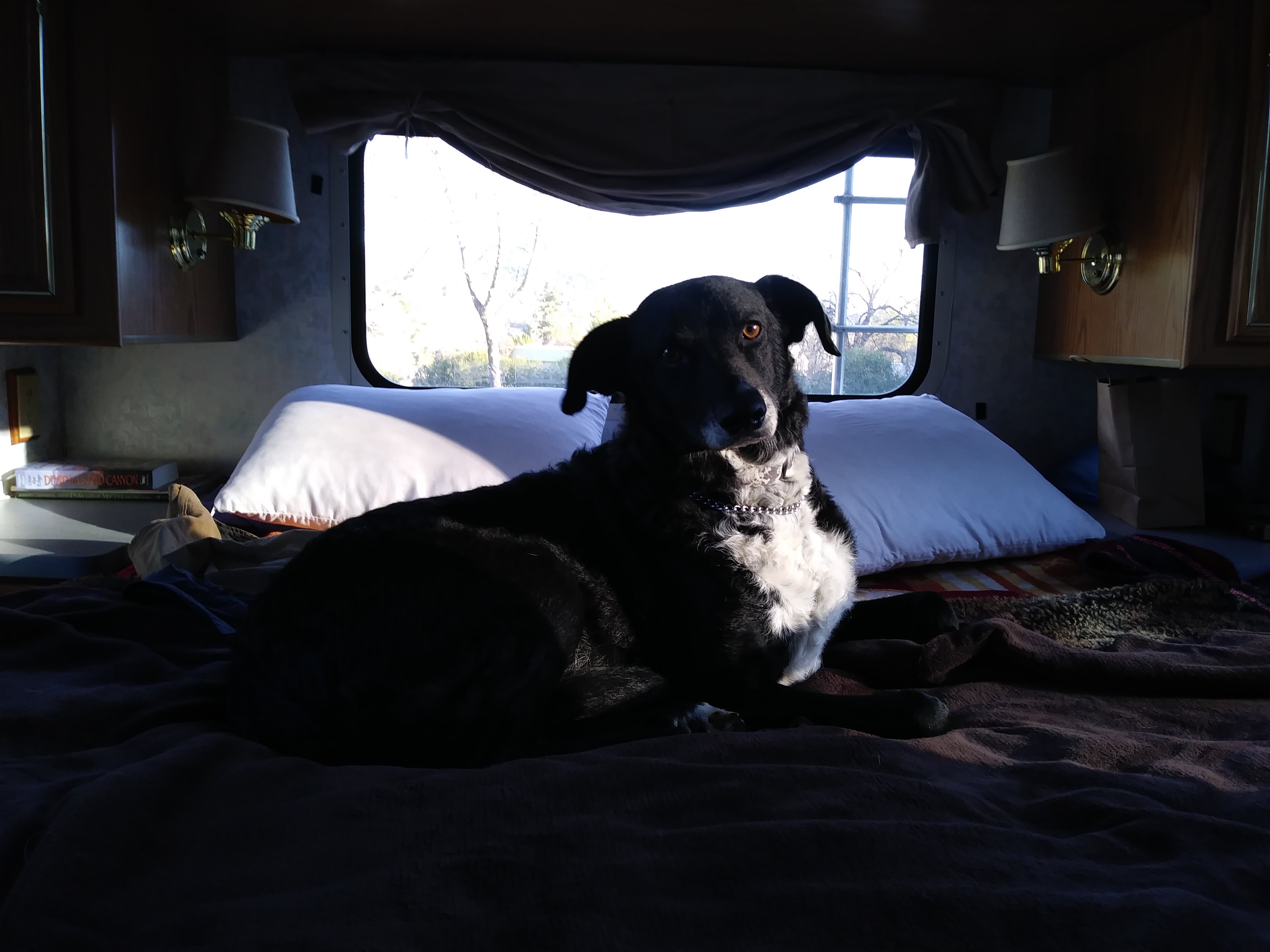 And guess where we are now?

Yup, back in New Mexico.

More big decisions being made and we’re trying to think big picture, rather than short-term living.

We loved Oregon – LOVED it – and while the rain got a bit much for the husband, I actually enjoyed it. Dogs loved the cooler weather; no snakes or nasty spiders; no humidity unless it was actually going to rain; a mist that was actually misty and cool, and just a little bit of SNOW; lots of places to walk; a huge dog park – didn’t make any new friends, per say, but they had fun – and having daddy home a lot more.

We loved Oregon but it was also getting a little expensive to stay at the RV place we liked so much – truly a gorgeous place with all the amenities and things we needed that were included in the monthly price. However, because of the season change to spring/summer, they no longer offered an affordable monthly rate so we switched over to a weekly one.

I had a job: A full-time, hands-on, hard-work kind of gig. I worked at a food repacking plant as a QA. It was busy work that kept me occupied for the 9 hours I was there every day – on my feet, exhausted, but also focused because you HAD to be to keep up. I was quite liked by my immediate supervisor and bosses, and I even made a few acquaintances. Of course, there were people who didn’t like me so much because I picked up the work very quickly and I was put into actual production work very quickly, and this pissed off some people, apparently. But that was fine – I wasn’t there to make friends, I was there to make money to support us. I was still looking at online work so we could head off on our adventures again.

The factory work was hard, tiring, and because of all the income taxes and union dues (which I wasn’t allowed to be part of until I hit 1600 hours of work… yeah… a YEAR until I was a member, but I had to pay the weekly dues which were about a third of my pay!) it became clear that while it was a relatively good amount of weekly pay, it felt a bit like I was working bloody hard for not too much gain every week. So I continued my search for online work.

While this was happening, my husband was doing his NG duty every month and finishing the qualification exams before heading to his training.

When he got a date for his training, and I got some online work (hopefully, long term) I quit the factory and we packed up (grabbing a few things from our storage) and headed off in Irma, with Ghost behind us, and we headed back down through Oregon, California, Arizona and then finally, back to New Mexico.

We’ve been here a few days now and the dogs are LOVING the yard again. The water is upsetting Gina’s tummy a tiny bit, but nothing major. The thorns are, as before, quite bad but we are solving that by buying some good Ruffwear boots for Odin and the girls. We’re going to see how much getting them rattlesnake vaccinations will cost, just in case.

We’re talking about staying, but it’s a decision we’ve got a few months to decide as April is the husband’s training month. After that, we head to Arizona for an experience in Overlanding that my husband is volunteering at; and after that, we’re heading back to Oregon in June, and we’ll make our final decisions after that. There are lots of variables and each one affects us in different ways, and in doing so, affects our final destination.

For now, the dogs are happy, we are settled in for a bit – so I can get some work done – and we can sort Irma out and the Jeep too. Azzie is doing very well now, thanks to her Posh Dog Knee Brace and she has actually been going on walks and playing without the brace for the last 2 weeks or so. We’re trying to rebuild the muscle on her left leg as it did diminish a bit – but not nearly as much as it would have atrophied if she’d had the surgery and been completely unable to walk. I can only sing the praises of the PDKB and I will continue to spread the word as much as I can.

The Vees Big Adventure continues, just not in the direction we thought.

On an aside: Amazon decided we could no longer keep our affiliate status as we’d not sold enough in 120 days to be “viable” so our link is no longer active.

We said Happy 9th Birthday to our Gina at the end of February, and Happy “5th or 6th” Birthday to Little Dude, Odin. Azzie turns 6 in mid-April and we will celebrate then too with Calichi Poochie Cones 🙂

Just wasn’t for us, I guess.