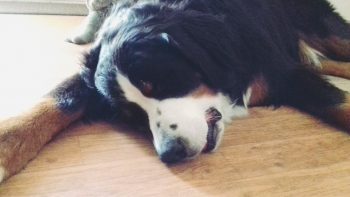 My poor little Azzie monster, she got herself another hot spot AND an ear infection at the same time, in BOTH ears. Thanks, Georgia summer.

This hot spot was so enormous that the vet was astounded at the size of it.

They had to sedate her to shave the area, and to apply all the ointments and shots and the medication to her ears. The vet said that she would be a bit “strange” after the sedation, for at least 24 hours. Bernese Mountain Dogs are very sensitive to the effects of anesthetic and sedation, and generally need less to get them “out” than most other breeds, so it’s more than 24 hours since she came round from the sedation and she’s still not quite “herself” yet.

I am very grateful that this was nothing malignant, or difficult to treat. So we’ll get through this post-sedation funk with my poor little Azzie, and hope the hotspot clears up as quickly as the last one did.

I write this, she is sitting close by my chair, resting against my legs. When she is … lucid… she has become even more of my big fluffy black shadow dog than she was before. When she’s in sleep mode (which is about 90% of the time at the moment, due to the sedation after effects) she plops down anywhere and tries to find a comfy position. The first night was the worst – she could NOT get comfortable. She cried and whimpered and whined from the moment she saw me down the end of the passage at the vet office and came running – wobbling is more descriptive – to me, until about 4 am the next morning. It was a difficult few days as my husband had to be up incredibly early in the morning and neither of us got any sleep in our worry and care of her, but she is feeling much better, thankfully. The other two dogs were very worried about her, and they didn’t sleep so well either. Weirdly, Gina has been much more her “old self” (before we got Azzie) while this has been going on. It’s like as Azzie’s loud, proud and crazy personality lulled, Miss Gina’s personality rose to fill the “gap” created. She’s been playing with Odin in the mornings (and at the dog park) and is very feisty and silly and runs around outside and does her own thing – investigating bushes and rushing forward on the walks to walk next to Odin, who is always in the lead… while Azzie has fallen right back behind me, and sometimes just stops and stands there thinking about things. It’s a strange phenomenon, and one I should speak to my friend Nicole about at some point – is it normal? I know Gina kinda went into an aloof state when we got Azzie – I think she thought she would always be an “only child” as she had been for the first 3 years of her life before we adopted her.

In a way, I’m hoping that this will help Azzie slow down just a little and grow up just a little, so that her personality can balance with Gina’s, and Odin’s, and they can become a balanced “pack” and be happier in their interactions with the world and other dogs. But if the “old” Azzie comes back I am still just as happy – I just want her to be herself again. This quiet, non reacting version of my poor little Azzie bear is just downright WEIRD, and she barely wags her tail – but that’s getting a little better now. She stares off into space a little bit, but not as bad as yesterday, and she at least responds to her name now.